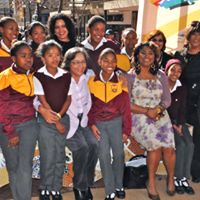 BRAVE IN THE NEWS

BRAVE trains girls to become leaders who speak up and demand change.  AS youth reporters, the girls document their own stories, and record other girls’ stories to advocate for solutions to the challenges they face, including gangsterism, sexual violence, lack of sanitation, poor reproductive health care, HIV-AIDS, and teen pregnancy.

The BRAVE Road Trips resonate with people across South Africa, and the globe.  Since December 2016, BRAVE girls have also written a regular column in the Cape Times, speaking out for girls who don’t have a voice.  Check out some of the press coverage here:

Cape Argus: Scared for our lives — just another day in Manenberg

eNCA: Girls are doing it for themselves in Manenberg

Cape Times: Rock Girls from Manenberg inspire peers in PE to start their own chapter

The Department of Justice and Constitutional Development has partnered with Rock Girl. Regional head Hishaam Mohamed said the department would also unveil a “safe space bench” – a Rock Girl initiative which started in Manenberg to provide children a space to support one another – at the court in August in memory of the three girls.

In the second of Molo’s series on individuals who have created positive change in Cape Town, we meet a group of girls who are working to make their school and their community safer. The newest bench, named the Afrikaburn Mighty bench and designed by Mark Thomas, is made of wood and sits on the grass near the Prestwich memorial in the central city. Two others of curvy concrete and mosaic tiles live permanently at the CTICC and in Khayelitsha...Read the full article online.

…First on the list of those campaigning for safety was a safe space to sit when they felt unsafe, because gangsters could walk freely across the school grounds. With the help of Rock Girl, the children created the first safe-space bench at their school, inspiring a citywide campaign that has led to over 30 safe-space benches, including several officially unveiled by Mayor Patricia de Lille….Read the full article online.

Titled Rock Girl, after the slogan “strike a woman, strike a rock”, Baird got the idea three years ago when she was volunteering at the Red River School in Manenberg, Cape Town. “Girls were not participating in the after-school running programme because they did not feel safe on the sports field,” she explains. “[We] began documenting the conditions around and at school and created a plan to make their environment safer, starting with a safe place to sit at school when the older boys and gangsters harassed them.” This simple intervention has inspired artists…Read the full article online.

On 13th September everyone is talking about…
Earlier this year, the Parks & Recreation comedian Amy Poehler (below) contacted Rock Girl about having one of the girls from Manenberg create a video diary for the new show, “Girls of the World”.

In light of my recent rediscovery of the wonders of cycling from doing a city cycle tour of Cape Town, I agreed to cycle through the streets of Cape Town under a full moon to raise money for the Rock Girl Safe Spaces initiative….

her belief in the ability of girls and women to change the world led India Baird, 47, from Nashville, Tennessee, in the US, to Manenberg, Cape Town, with one goal – to give them the opportunities to do it…

RED RIVER Primary School in Manenberg is not always a happy space. Blocks of flats look down on the school’s classrooms, and young men hang out of the flats’ windows, whistling at and cat-calling the school’s female pupils, sometimes even throwing stones at them… Read the full article online.

When a group of grade five girls from a school in Manenberg confided in human rights lawyer, India Baird, that they didn’t feel safe at school, she decided to create a safe space for them, by installing a bench next to the tuck shop. India, with Karina Turok, is at the helm of a project called Rock Girl: an organization which highlights challenges faced by women… Read the full article online.

Strike a woman and you strike … Rock Girl, a campaign to help women become stronger and take back their communities… Read the full article online.

… This initiative seeks to reduce the incidence of violence in characteristcally unsafe areas by creating “safe spaces”. With the help of various artists and designers, women and girls in the community co-create unique benches which are then strategically placed in hand-picked, underprivileged areas and serve to represent a place of refuge for anyone in need… Read the full article online.

Over 45 talented Capetonians have lent their creative skills to transforming soccer balls into pieces of art that are up for public auction on August 4 2011. The auction will be held in aid of charity initiative, the Safe Spaces campaign, which aims to raise awareness about the need for greater safety for women and girls…. Read the full article online. 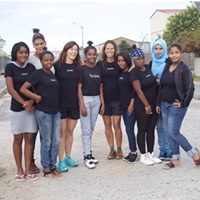 Stories from the road of adventure, resilience, and impact 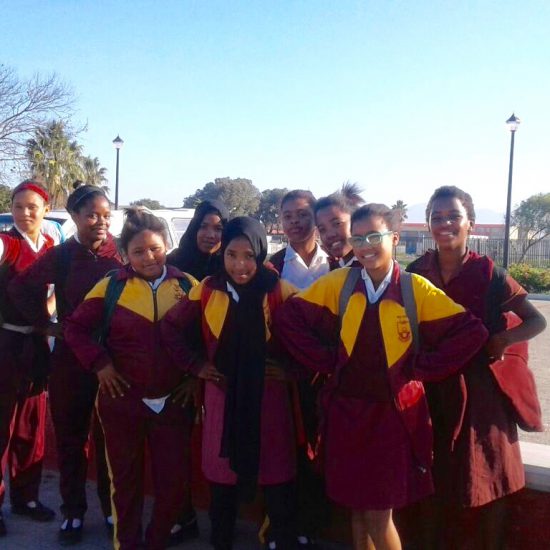